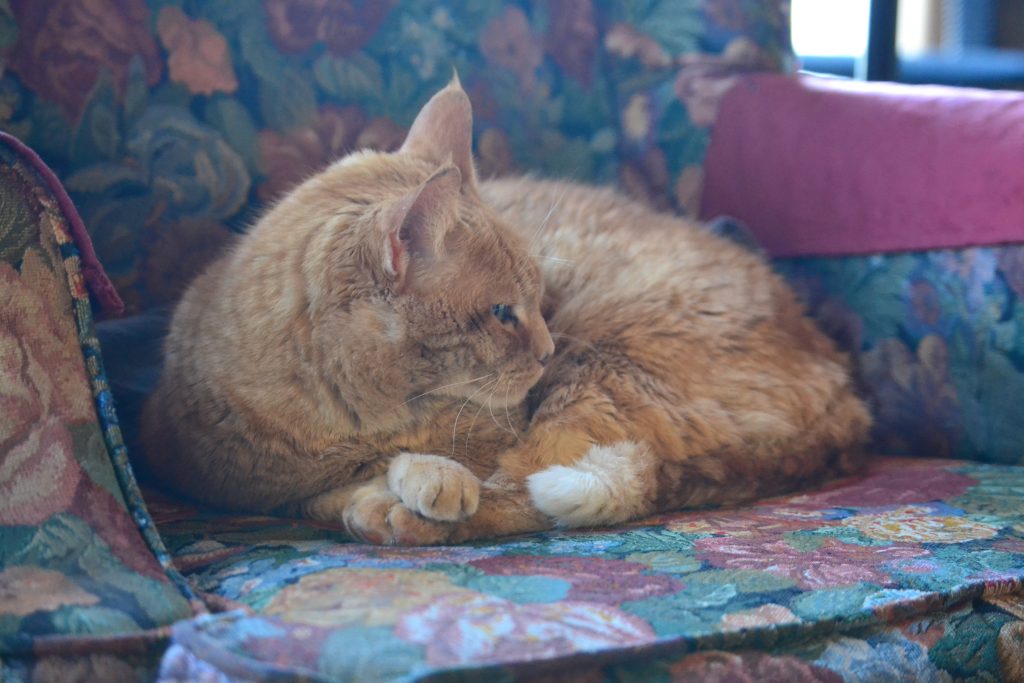 One of the best direct-response marketers I ever met never sent an email, wrote a sales letter, or attended a networking event. He couldn’t speak a word of English, much less read or write…

He wasn’t even physically capable of holding a pen.

This legendary “salesman” was 12 lbs. of fighting muscle. He walked tall at roughly 6 inches high, and measured just around a foot long, tip-to-tail.

Over the years, this miniature Viking taught me invaluable life lessons:

My Dad is an old-fashioned Texas cowboy, and they follow a code:

Also, never feed cats. And, most importantly, under no circumstances, up to and including the zombie apocalypse, no cats in the house. There is no appeal.

Furry was the most ordinary little orange cat imaginable… an aging fixed tom who’d been abandoned and lived semi-feral by his wits and the charity of the local snowbird community.

VCU Masterclass #1 — Set a powerful goal you care about

One January night when the snowbirds were gone, Furry showed up, wet, shivering, gaunt from the winter, and very pitifully asked if we couldn’t just spare a few scraps… please?

“Don’t feed that danged cat!” my father ordered. Any sensible cat would have seen clear defeat, and looked elsewhere.

Within two days, there were scraps being left outside.

My father consulted The Cowboy Code, and discovered that, when in doubt, “Mama ain’t happy,” trumped “The Cat Policy.” So he reluctantly allowed us to first feed Furry, and then to put out a fleece-lined box.

Just as long as it was clearly understood that the cat was not, ever, coming inside.

VCU Masterclass #3 — Never give up! “No” only means “probably yes — later”

Furry twitched his whiskers, eyed the warmth and comfort waiting for him, and prepared the long campaign of convincing my dad that his “no” was really a “yes” waiting to happen.

Furry was too good a persuader to demand the sale, though.

Unlike most cats, he never yowled or clawed, no matter the provocation. Instead, for the next six months, he embarked on a direct-response sales campaign.

Every day brought a new reminder of what a good little kitty Furry was.

Finally, he made it to the living room rug and curled up, perfectly content with just a tiny corner… please?

Furry was the ultimate “camel in the tent.” Before long, he was inside for most of the day. Then he was curling up on laps for movies.

And by the next winter, he was allowed to sleep inside.

My father grumbled, and frequently dumped Furry off his napping perches. To which Furry responded by allowing us to carry him around upside down like a baby, shooting my dad, “See how much they love me?” smirks.

Then my great-aunt arrived for a visit, unexpectedly bringing her yappy little dog into the house.

We never had a chance to warn her that our sweet little Furry was a famous dog-fighter. According to local lore, he’d painfully taught every dog around — irrespective of size or meanness — a painful lesson in respect.

Yet our Champion Dog-Whipper took one look at that tissue-box Napoleon, and, unimpressed, headed for the loft.

“Now that is a good cat,” my dad announced.

With his place in the family assured, Furry proceeded to live life to the fullest. He enjoyed…

His greatest triumph came on those rare nights when he even managed to quietly jump up on my dad’s lap and sit purring, ever so softly.

VCU Masterclass #8 — When it’s time to go, walk out on your own terms, and leave them crying

Furry wasn’t a young cat when he showed up at our door, and he realized before we did that his trails had been run.

One cold winter night nearly five years after he first arrived, we woke up to a terrible cat fight. By the time we got outside, Furry had his attacker down — and despite horrific injuries — was busily mauling a full-grown lynx.

Even the local vet fell instantly in love, cooing over him for being such a brave, good little kitty.

He was never quite the same, though.

Several months later, he picked another fight. We found Furry under a car — alongside a badly hurt mountain lion. Furry didn’t survive, but he put up one heck of a fight.

I’m convinced Furry, as a true-hearted viking, is in Valhalla, cuddling up to a Valkyrie, purring sweetly and casting covetous glances at Odin’s chair.

Not all goodbyes are so dramatic or final, but Furry’s final lesson fits almost every situation.

Whatever the circumstances — from price negotiations to letting clients go — when it’s time to go, make sure you walk out on your terms, leaving behind a crying audience and shoes that can’t be filled.

Thank you all for having me as one of the Reality Blogger Challenge Finalists! It’s been a huge honor, a ton of fun, and a genuine challenge as I’ve tried to match wits and words with some truly exceptional writers and marketers.

Hopefully you’ve enjoyed reading my articles as much as I’ve enjoyed writing them.

You know what to do! Voting will start soon, and I’d really love it if you choose me to be the one to spend 2021 exploring the wonderful world of wealthy web writing with you.

… And develop personalized success systems to help you manage all the different aspects of your best writer’s life.

9 Questions to Ask When Nothing Seems to Be Working

May Member Update – Putting Together a Proposal